In celebration of the 5 Year Jubilee of the Swiss LSE Alumni Association and in support of the worldwide Campaign for LSE, money was raised for a special Jubilee Gift to the School. The target of GBP 10'000 makes it the most ambitious fundraising campaign undertaken to date by an European national association of LSE alumnae and alumni.

Take any recent ranking, the School is the leading institution for advanced research and study in the social sciences in Europe. This leadership position has been attained by a long track record of world-class scholarship sufficiently funded by the public purse. In the last 20 years, however, public funding for higher education, not only in Britain, has been predictable only by its decline. In the process, even the best British universities are struggling to retain staff, refurbish their aging campuses and widen participation in higher education of young people from low-income households.

At the same time, the School faces increasing competition from well-endowed U.S. universities for the best staff and students. At the time, several talented LSE scholars were lured to the United States, attracted by bigger budgets, more research assistants and better facilities.

"I'm not simply giving some money to an university but making an investment in people. When I attended the School, its campus was a dump. Today's students deserve better. Give 'em a conducive learning environment and they will flourish."

Marking a Milestone in Alumni Relations

Promoting the School is one of the key missions of the Swiss LSE Alumni Association. So what better way to have marked our 5 Year Jubilee than to make a collective gift to our alma mater.

Swiss alumnae and alumni can be proud of their Alumni Association. It has pioneered the use of the Web in the dissemination of information and the delivery of services. It engages a greater proportion of the national alumni constituency than any other national association. It has and continues to design and execute innovative projects in the field of alumni relations ... and, now, resource mobilisation.

Winston Churchill once said: "We make a living by what we get, we make a life by what we give." Indeed, giving back is just one way to say "thank you" for the gift of education one has received and can be a most enjoyable opportunity to get and stay involved with the School.

Many alumnae and alumni report that they have greatly benefited, both in their personal lives and in their careers, from the time spent at the School. Always amazing is how graduates from all walks of life have used their LSE education to the benefit of their fellow men.

The Jubilee Gift Campaign enabled alums to give back and share your successes with the next generation. 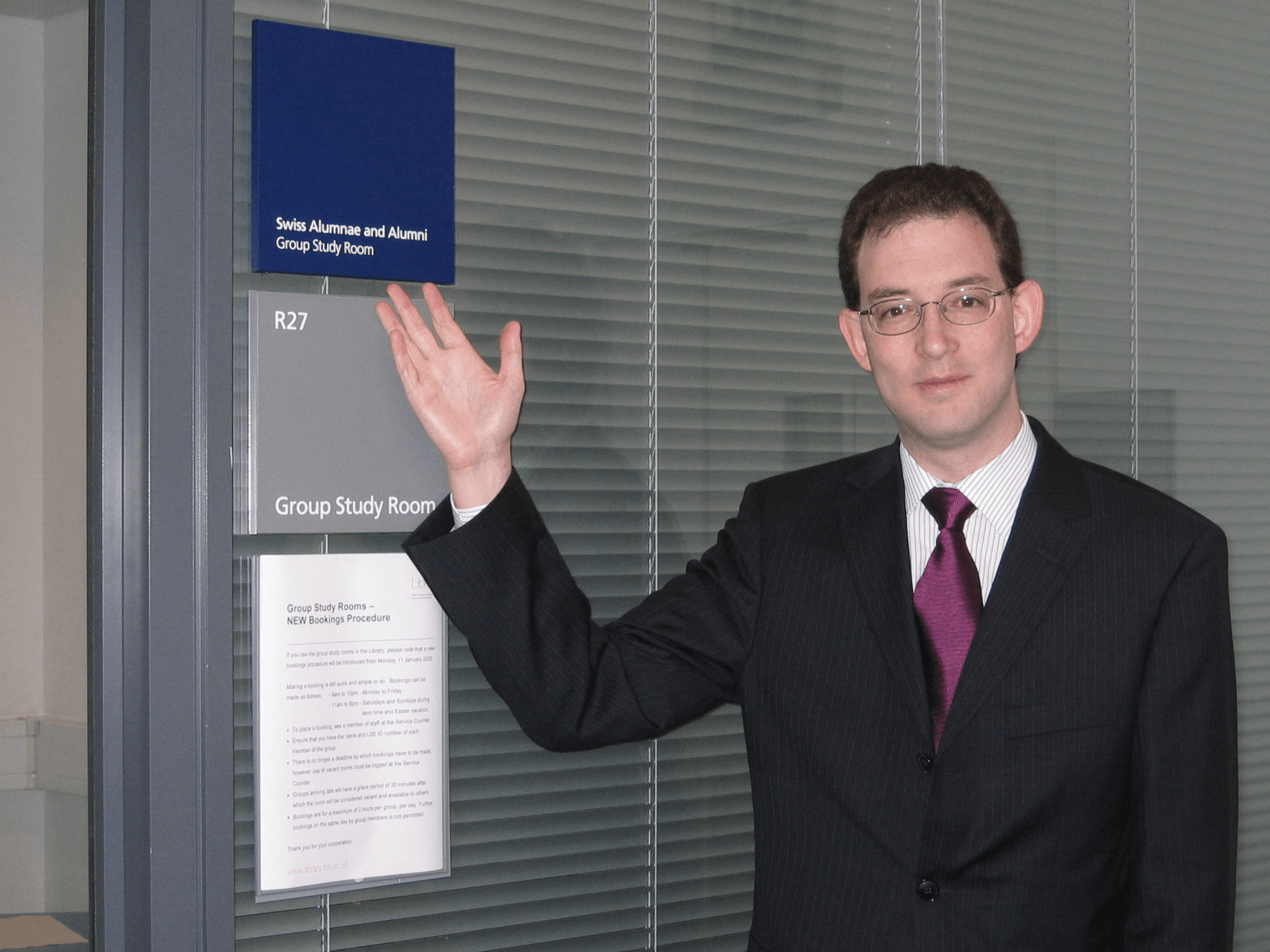 In order to identify our gifts collectively, the School named a key public room in the new library: "The Swiss Alumnae and Alumni Group Study Room".

The redeveloped library is a landmark building for LSE and London. Outside, the building still bears a WWII shrapnel-damaged sign. The interior might not have been battle-scarred, but it was always more "serviceable" than glamorous, even when originally occupied by the library in 1978. After a CHF 70 million redevelopment the library has been transformed into a superb environment for individual and group study.

The library has several special rooms for students to engage in group study. Being always in great demand, these group study rooms are one of the most heavily used spaces within the library. All but one has been named for foundations, corporations and other leading donors to the redevelopment of the Lionel Robbins Building. Acknowledging our collective gift and the myriad of beneficial activities of the Swiss LSE Alumni Association, the School agreed to name the last of the group study rooms after the Swiss alumnae and alumni.

Take full advantage of being an LSE alumna/us (former student, staff or visitor of the LSE) by becoming a member of one of the largest and most active national associations of LSE alumnae and alumni worldwide.